Skip to main content
When the Ghent Altarpiece finally returned to its rightful place in St Bavo's Cathedral after World War II, it was celebrated with a Te Deum concert. Now, 75 years later, history repeats itself and the Ghent Altarpiece will return home in its full glory, after a long restoration campaign.
Add to “My Trip”
22 until 23 April 2021
Dates & hours of this event

For the occasion, 2 Flemish choirs, the men’s chorus Cibus Spiritualis from Ertvelde and the mixed choir Cum Splendore vzw from Ghent, will join forces with the choir and orchestra Greater San Diego Music Coterie from the United States. Just like in 1945, when the altarpiece was returned to St Bavo’ Cathedral, they will perform a Te Deum. In addition to the “Te Deum” (1992) by Chan Wing-Wah, the choirs will also perform the work “Missa de Nossa Senhora da conceiçao”(1810) by José Mauricio Nunes Garcia. These two works will be performed for the first time in Flanders. The concert will take place in St Paul’s church.

Discover everything about the Van Eyck year here
The information continues beneath the illustrations.
3 photos
Classic
The Ghent Altarpiece
Music
Van Eyck
Find a hotel for your stay in Ghent 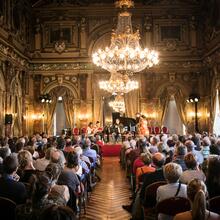 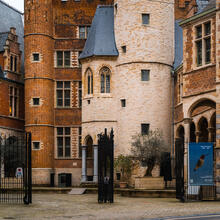 Oasis of peace near Sint-Baafsplein 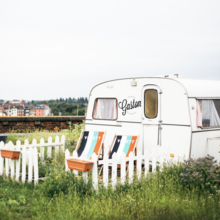