'Van Eyck Diagrams' is a musical and theatrical séance as well as an honorary tribute to a frenetic genius, but also a re-enactment of his unfinished life's work. In the presence of the audience, Van den Acker's impenetrable Van Eyck archive is unlocked: his endless series of plans and sketches, the obsessive comments on the smallest and most vague details and Van Eyck's iconoclastic view of the beginnings and ends of art. The nocturnal conversations and the many silent but no less musical hours in the study of this unique art historian are relived until the disastrous end: Van den Acker's desperate visit to Hubert van Eyck's grave in Ghent. Van den Acker claimed it is possible to recreate Van Eyck's universe not in words, but in a parallel, musical world.

This is a co-production by De Bijloke Muziekcentrum and KunstFestSpiele Herrenhausen.

Music
Van Eyck
Find a hotel for your stay in Ghent

This event is over. 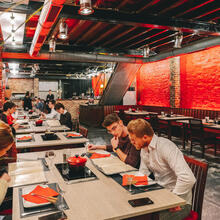 Authentic dining with a twist 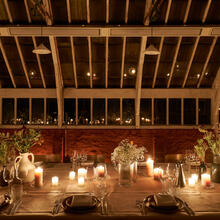 Alison, the secret of the fallen angels