Skip to main content
Located on the banks of the river Lys, the Graslei and Korenlei area was an important inland port in Ghent from the 10th until the 19th century. Afterwards, all port activities were moved to the north of the city. Many guilds built their guildhalls on Graslei and Korenlei.
Add to “My Trip”

The Guildhall of the Free Boatmen is a gem located on Graslei and has a rich history. It was owned by the Guild of the Free Boatmen from the mid-16th century until the second half of the 17th century.  Afterwards, the building in Brabantine Gothic style changed owner and purpose several times. On the first floor, you can see Charles V’s motto “Plus ultra” (Further Beyond) and the coats of arms of the regions he ruled.

It’s one of the best preserved and oldest buildings in Ghent's old port and has been listed as a monument since 1943.

The North Sea Port company bought the old guildhall in 2011, restored it and opened it to the public. You could say that part of port returned to its birthplace. The building is now known as “Havenhuis” (Port House). There is an exhibition on North Sea Port's operations and on Saturday afternoons, you can visit the building with a guide.

History on the Graslei and Korenlei

Ghent’s beauty mirrored in the Lys 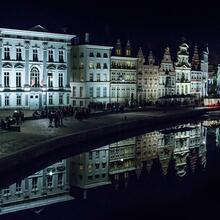 The port of Ghent 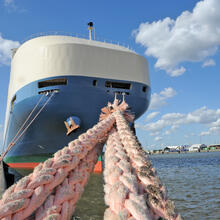 Gastronomic delights on the water 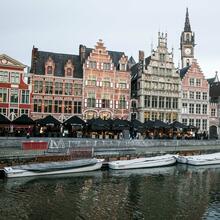