Skip to main content
In the 14th century, the Castle of the Counts was no longer a suitable residence for the Count of Flanders. Lodewijk van Male, moved to Hof ten Walle, a town house in this neighbourhood. It was here that Charles V was born in 1500.
Add to “My Trip”
1 event planned at this location

The Prinsenhof, as it was called from then on, was around 2 hectares in size and fully walled. It was a gigantic, walled complex with more than 300 rooms, a zoo and a pleasure garden (!).
The residence fell into disrepair in the 17th century and was ultimately sold. In the late 18th century, Prinsenhof suffered the same fate as the Castle of the Counts. A sugar refinery, soap factory and later a steam-powered cotton mill arose from the ruins.
The only remnant of the Prinsenhof is the Donkere Poort (Dark Gate), which was given this name in the 19th century because it was heavily soiled by the nearby factories.
However, this does not mean you should bypass the area: it is one of the city’s many hidden gems.
In the first week of September the Prinsenhof Festivities take place here, including the largest flea market in Ghent.

Charles V and the Noose Bearer

The entire area around Prinsenhof lives and breathes the legacy of Emperor Charles, who occupies a special place in the history of Ghent. It was this emperor who returned to his city of birth when the citizens of Ghent rebelled against his measures. He received the city’s governors at Prinsenhof on several occasions and in 1540 imposed the ‘Concessio Carolina’, which considerably restricted their freedom. Dozens of Ghent dignitaries were literally forced onto their knees, dressed in hair shirts with nooses around their necks. Seventeen were decapitated and one was burnt to death. These days, the local residents are proud of their nickname ‘noose bearers’, but back then that certainly wasn’t the case.

Holding his head up high and wearing a noose around his neck, De Stroppendrager (The Noose Bearer) looks at Prinsenhof, where Charles V was born, and at the emperor’s statue at Prinsenhofplein. This man does not kneel humbly. He wears his noose with pride.

The statue of Emperor Charles V is a gift from the Spanish Imperial city of Toledo to the city where Charles V was born. It was inaugurated on Prinsenhofplein in 1966.

Located on the corner of Zilverhof and Pluimstraat, ‘The Knitster’ is a bronze sculpture created by French artist Jean-Pierre Clémençon for the ‘Formes Humaines’ exhibition in the Rodin Museum in Paris in 1976. After the exhibition, the sculpture was installed at the artist’s home. 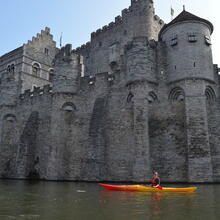 Luxury hotel by the water 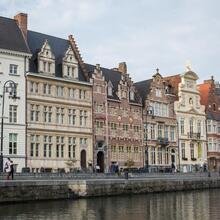 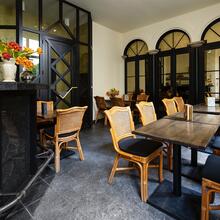