Skip to main content
Where the sick were once treated, music lovers are now pampered. Lovers of classical or contemporary music and jazz will definitely find what they’re looking for here.

Thanks to its concert hall in a 13th-century hospital, Music Centre De Bijloke is unique in the world.

It offers a modern take on music by embracing cross-overs with other art forms such as theatre and film, as well as children’s shows, and festival weeks centred around current themes. Each season there are over 120 concerts going on, featuring top musicians from home and abroad. Every year, over 100,000 visitors find their way to the Music Centre for concerts, courses, and debates.

Music Centre De Bijloke was thoroughly renovated in 2019-2020. It is an architectural mix of age-old and brand-new elements.

The café and the foyer are bustling places in the complex, thanks to be interior design by the Antwerp Studio Helder and the Ghent collective Onbetaalbaar, who both consider ecology and reuse of paramount importance. The historical chapel serves as cloakroom.

The unique acoustics are the concert hall’s most important asset. The 13th-century roof does not absorb any sounds anymore, thanks to the new deepening of the floor and the wainscoting. Everywhere in the concert hall you can enjoy an optimal concert experience. The acoustic reflection panels ensure excellent acoustics for both the audience and the musicians. The seats have wooden arm rests and bottoms for acoustic reflection and a luxurious upholstery for optimal comfort.

“The exceptional acoustics enhance the contact between the musicians. The orchestra sounds like a balanced whole, but at the same time the sound is very refined and clear. Those two aspects combined result in a hall that makes the orchestra shine at its best."
Conductor Kristiina Poska

The Bijloke Gent Music Centre, with its historic rooms, technical knowhow and excellent catering facilities is also the ideal location for congresses and events, only a stone’s throw away from Ghent city centre. 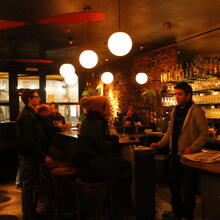 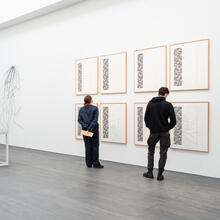 For foodies and sugar junkies