Skip to main content
In the 11th century this site featured a wooden church dedicated to Saint James. A century later, a Romanesque church was constructed on the same site. Transformations, destructions and extensions alternated in the centuries to follow.
Add to “My Trip”
All opening hours

The church’s interior is a mixture of Romanesque and Baroque elements and art. The church houses a unique Van Peteghem organ and was a meeting place for the guilds. It also features numerous paintings, as well as the tomb of Jan Palfijn, the inventor of the forceps.

St James’ church is now a church of culture, where activities are organised in a sociocultural context. It is once again a meeting place, centred around art and culture, without forgetting the religious aspect.

The square around it, called Bij Sint-Jacobs, and the Trefpunt café are the true epicentre of the world-famous Ghent Festivities, the annual people’s festival in mid-July which really signals the beginning of summer in Ghent.

Centuries of history behind a baroque façade

A ten-day party around ten centuries of history 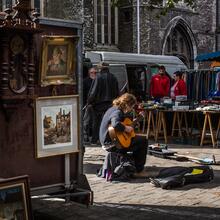