Skip to main content
The STAM is the ideal place to start your cultural holiday in Ghent, an unmistakeably contemporary building against a historic backdrop. Ghent is a city of every era, and the same applies to the modern Ghent City Museum: the 14th-century abbey, 17th-century convent and new 21st-century building all form part of the STAM.
Add to “My Trip”
4 events planned at this location
All opening hours

The STAM tells the story of Ghent from the Middle Ages to the present day, with imaginative collections and interactive multimedia. The past, present and future of the city are presented in a clear and interesting way: from mediaeval metropolis to city of knowledge and culture.

Walk all over Ghent!

The eye-catcher at Ghent City Museum, the STAM, is a gigantic aerial photograph of Ghent that you are allowed to walk all over. Use the multimedia app to see Ghent in detail in four different centuries. You can discover the historical centre and the sub-municipalities on your knees. A street finder helps you find your way.

Construction, life and connectedness are the key elements of a city and you can feel that in the Ghent City Museum (STAM). Here you can see the city grow and change. Ghent is presented as a character telling its story. You will discover how Ghent has been connected with the Low Countries, Europe and the world throughout the ages.

History is constantly being written in Ghent. At STAMplein, a square inside in the Ghent City Museum (STAM), you can discover a collection of fragments from this living city. It is the place to be for guest exhibitions, smaller expositions of the private collections of locals or items from the STAM collection.

The STAMplein is a separate part of the museum with a changing programme. It is accessible free of charge and can be visited independently from the rest of the museum.

From one item to another: “The story of Ghent” in 15 items

If you don’t you have enough time or don’t feel like examining every single detail of ”The story of Ghent”, you can use a practical guide that will take you along fifteen unique items you simply must have seen during your visit of STAM. You can obtain the free guide at the reception desk before you start your visit.

Across all museum rooms, there is a trail for children. Children can discover the city as merchants, artisans, architects and tourists. They sell fabrics, decorate façades and plot routes.

The STAMcafé is the place to feel the atmosphere before your visit to the museum or to let your impressions sink in afterwards.

Quiet spots in the arts quarter of Ghent

Ghent’s ‘arts quarter’ is not only home to impressive historic buildings, but also to quiet green spaces, parks and gardens where you can fully recharge your batteries.

Concert hall in a former hospital

In 1228, the sisters of St Mary’s Hospital consecrated a new hospital here. It had space for 40 beds in the ward, but back then the sick were expected to sleep more than one to a bed. As they say, a problem shared... After the French Revolution, the Bijloke site served successively as a civilian hospital, medical faculty and finally as a music centre with international fame.

The former hospital ward, with magnificent wooden beams in its roof, is now a concert hall where musicians fall in love with the unique acoustics. Come to listen, but don’t forget to look around as well.

Prefer not to wait in line at the ticket booth? Want to be sure you can discover the STAM when you want to? Then book your tickets online in advance and enjoy your visit to the fullest.
Book your tickets here!

You can schedule your group visit online through the link below. The staff at BOEKjeBEZOEK will get back to you as soon as possible with all the necessary the details of your reservation.
Book your group visit online
The information continues beneath the illustrations.
13 photos
Jetty
CityCard Gent
History
Free Wi-Fi
Groups
Child-friendly
Art
Arts district
Museum
Wheelchair accessible
Sales point CityCard

Classic and contemporary music and jazz 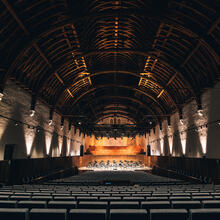 The Citadelpark in Ghent

Largest green lung between the Scheldt and Lys 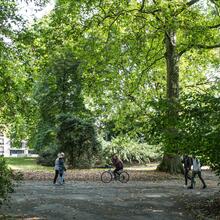