Skip to main content
The beguinages of Flanders and the Netherlands are always oases of calm and stillness, where you might still expect to see an old beguine mumbling her prayers in a doorway. Two of Ghent’s three beguinages have been included on the UNESCO World Heritage list.
Add to “My Trip”

Although the Old St Elizabeth Beguinage, in Begijnhofdries in Ghent, is no longer enclosed by a wall, making it simply part of the city, it still has a unique atmosphere. Today the Old St Elizabeth Beguinage is known as ‘holy corner’, a place of religious tolerance, because it has no less than three different churches: one is Anglican, one is Orthodox and the other is Protestant.

This open beguinage grew into something of a ‘beguine city’ in the 13th century, with a church, the ‘Grootjuffer’s House’, an infirmary, a chapel, more than a hundred houses for beguines, a bleachfield (a field where linen was laid out to bleach) and an orchard. After the French Revolution, with increasing industrialisation, the inhabitants moved to their new beguinage in Sint-Amandsberg in 1873.

The new Orthodox church in Sophie Van Akenstraat is a striking sight in Ghent. A visit here is more than worthwhile. Inside, the church is painted with frescos using the authentic Byzantine technique. The façade depicts the Twelve Apostles with mosaics in rounded niches.

Heavenly art on façades in Ghent

Do you want to see more of this colourful façade art during your city trip? You will find another gorgeous mosaic on the façade of the Royal Dutch Theatre on Sint-Baafsplein. Apollo, the Roman god of music and joy, is represented with his muses: song, dance and music. Ghent is full of historic charm and captivating interest. 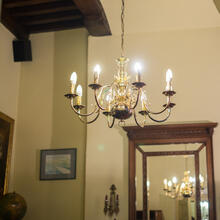 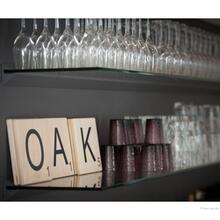 Sip a coffee in a multicultural neighbourhood 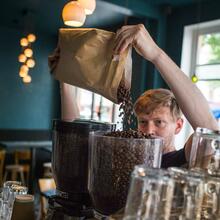