Skip to main content
This walk starts at the bridge over the river Lys on the corner of Kongostraat and Minnemeers, and ends at Schipperskaai. It takes you through the Heilig-Kerst and Oude Dokken neighbourhoods, where you will discover the history of this former dock area by means of remaining buildings and street names that refer to shipping, the harbour and the textile industry.

From linen to cotton

Blekersdijk is the first reference to Ghent's industrial past we come across. Bleachers used to spread linen and yarn on the ground to be whitened in a bleachfield; later on, this was replaced by indoor industrial bleaching.  You now walk along Huidevetterskaai where tanners used to treat animal hides to produce leather in the Middle Ages.

Sleepstraat once was lined with the homes of Ghent’s knife grinders and was therefore called Slijpstraat (slijpen means ‘to grind'). Nowadays, this street abounds with Turkish restaurants.

On the square in front of St Salvator’s church, the bow of the barge Rihera draws our attention. This was the church where the bargemen worshipped. The church is commonly called Heilig Kerst, which is also the name of the neighbourhood. Until 1999, the docks where ships moored (now the Old Docks) were part of the inland port. As the vessels got bigger, larger docks were constructed further away from the city centre.

Sint-Salvatorstraat was once the busiest shopping street in this working-class area. The boatmen were served at the rear side of the shops in this street. It was even said that the local shopkeepers earned more money at the rear of their shops than at the front.

The Dok Noord shopping centre is located on a 19th-century industrial site. The following companies were established here:

Connection to the sea

The Sassevaart canal has connected Ghent to the Western Scheldt and thus to the sea since 1547-1549. This connection had always been the city’s wish. ​​​​​In 1823, King William I of the Netherlands decided to extend the Sassevaart canal to Terneuzen. Since then it has been known as the Ghent–Terneuzen Canal.

In the 1960s children's television series of the same name, Captain Zeppos navigated his amphibious vehicle across Ghent’s waterways. His adventurous journey ended here at the Old Docks. The neighbourhood park at the Houtdok dock was therefore named after him. Local residents had a say in the naming.

A view of the Old and New Docks

The green dock-side crane on the western bank will be equipped with an observation platform, giving visitors a magnificent view of the docks. Schipperskaai, a new quay for houseboats, is the starting point of Ghent’s New Docks. Urban development company Sogent is building a new housing project for about 400 families here. Quay promenades around the Old Docks will be an attraction.

Did you know that Bataviabrug bridge is a technological tour de force? It is a vertical-lift bridge that can be raised by means of hydraulic pumps, allowing pedestrians and cyclists to cross even when vessels are passing under the bridge.

After their abbey had been sacked during the 16th-century wars of religion, the nuns from Doornzele (Evergem) founded a new convent in this street, aptly called Doornzelestraat. You pass by an accommodation centre for asylum seekers called Verapa. Its name refers to Verapaz, an area in Guatemala where King Leopold I had founded a colony. In 1843, a ship departed from Ghent carrying colonists who had been told that the area was rich in gold. People have sought a better life far from home since time immemorial.

You are now passing by Logstraat. Did you know that a chip log is a navigation tool for determining the speed of a vessel? It consists of a wooden board attached to a knotted line (the log line) which is allowed to pay out. That’s why a vessel’s speed is expressed in knots. And where are all navigational data recorded? That’s right ... in a logbook. 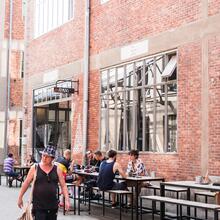 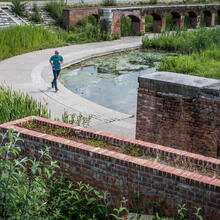