Skip to main content
As evening falls, the daylight in Ghent does not simply make way for the streetlights. There is light art to enjoy as well. Streets, squares and buildings are covered in an artistic light display. It is almost as though the city were getting dressed up for the theatre. The effect is awe-inspiring. Discover Ghent Alight and immerse yourself in this de-light-ful evening experience!

The Ghent Light Plan was first designed in 1998. The idea was to provide sustainable lighting for the city without wasting energy. But at the same time, it has transformed the centre of Ghent into a magical nocturnal landscape of light and shadow. Architectural accents, streets, monuments and squares are lit up to display them at their best. Ghent is a leading light in combining environmentally conscious lighting with beauty. Let the play of atmospheric lights spark your imagination. Rediscover the city by night in a whole different way. The city has received many prizes and international acclaim for its pioneering role in integrated city lighting and illumination. 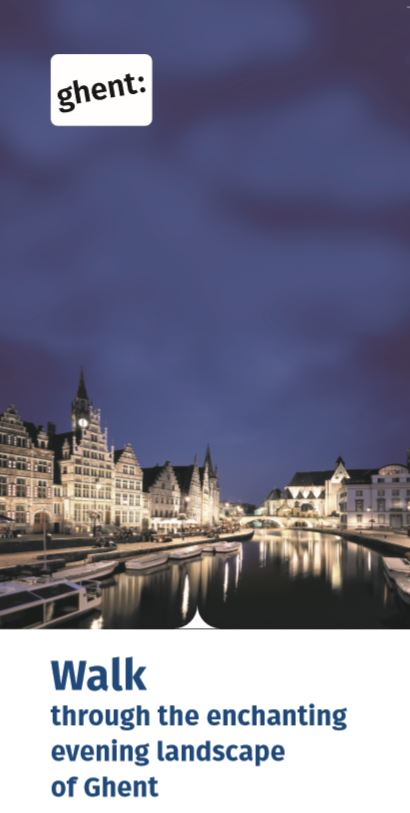 Would you like a sparkling tour of Ghent’s most beautiful illuminated buildings and squares? Follow the light walk and discover it for yourself! Start at the Kouter for a walk of approximately three miles. The walk takes you past all the highlights of the Ghent illuminations.

You will need about two hours to complete the entire walk. It’s best not to start too late, because at the stroke of midnight, the atmospheric lighting is replaced by ordinary streetlights. Plan your walk with one of the guides. Or explore for yourself: download the map here!

The guides’ associations listed below offer a selection of tours by night.

Enjoy a personal guided tour or join a group
Guide

Interactive guided tours with a city expert in Dutch, English or Russian
Guide

To draw attention to its award-winning lighting, the city organises the Ghent Light Festival every three years. Hundreds of thousands of visitors head to Ghent from far and wide, Belgium and abroad. Almost 40 dazzling light installations are set up throughout the entire city, along a trail almost 4 miles long. Some of these works of art are made by Ghent residents. Others provide a platform for international light artists. Wander from one astonishing sight to another along the interactive trail! The best thing of all is that people come together for light art at the darkest time of year. There is nothing like this festival of light anywhere else in the world. Make sure you don’t miss it the next time it comes to town!