Skip to main content
When visiting Ghent, you should certainly include Zebrastraat in your cultural discovery route. This unique example of historical and at the same time innovating architecture is a must-see during your city trip.
Add to “My Trip”
2 events planned at this location
All opening hours

In the 19th century, Ghent had its own zoo. It was closed in 1902, as it had to make way for the fast growing city. Charles Van Rysselberghe, who was the city architect at that time, was commissioned with the construction of modern working-class houses. He drew a special design that would soon be dubbed “De Cirk” (the circus). The elliptical inner courtyard was the playground of at least three generations of working-class children. Not much was invested in the site and after 100 years, it was completely dilapidated. In 2001 the Liedts-Meesen Foundation saved this architectural gem from destruction. In 2006, "De Cirk" was completely renovated and converted into the Zebrastraat project.  The original architectural structure was maintained, however. The new development project “New Zebra” was added to the site in 2013, followed by “The Elephant” in 2018.

Artist Nick Ervinck put his own stamp on the site with two works: a bright yellow ‘Swiss cheese’ structure on the roof and a veil-like construction in the same colour on the rear facade.

In Zebrastraat, historical architecture and contemporary art are combined to constitute a unique setting for all kinds of cultural events. The impressive contemporary art collection of the Liedts-Meesen Foundation is an important part of the site and is well worth a visit in its own right. In addition, temporary exhibitions are almost continuously organised in the exhibition hall.

This is also an ideal venue for interesting lectures on various topics, as well as for presentations about art and culture, people and society. Consult the agenda for more information about the scheduled events.

The futuristic pastel pink XYZ Lounge is a creation by artist Didier Faustino. It’s the perfect place to escape the hustle and bustle of the city. On Thursday nights, live music is played.

In summer, the central square is converted into the pop-up summer bar Zebrabeach.

Amuse yourself on a barge 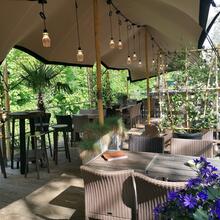 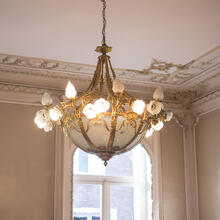 Restaurant on the outskirts of Ghent 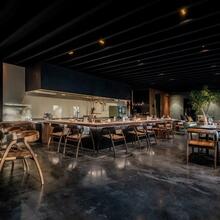