Skip to main content
A weekend trip to Ghent is simply not complete without a visit to the mysterious ‘Castle of the Counts’. This important sight in Ghent is a castle with a very turbulent past, closely intertwined with the complex—often stormy—political and social history of the city. It is the only remaining mediaeval castle with a moat and largely intact defence system in Flanders. Your visit to the Castle of the Counts will give you a complete picture of heraldic culture in the 12th century. The gatehouse, ramparts, keep, count’s residence and stables are open to visitors.
Add to “My Trip”
All opening hours

Torture at the Castle of the Counts

The Castle of the Counts boasts a unique collection of torture equipment. What used to be the pantry now features the torture equipment, which is displayed in a suggestive executioner's cabinet. The former courtroom features the collection of judicial objects. The Castle of the Counts also hosts all kinds of cultural activities, events and activities, for example during the Ghent Festivities. It is also a popular place to get married for Ghent’s locals.

The keep, symbol of the Counts’ power

Go back in time inside this majestic fortress. Its history goes back to the time of the Roman occupation, when there was already a settlement on a sand bank by the River Lys. After a brief period of Viking plundering, the Counts of Flanders converted the earlier wooden constructions into a keep (living quarters) in the Middle Ages, with ramparts built entirely of stone, replete with 24 towers. The imposing building with its military architecture was a symbol of the Counts’ power in the turbulent city of Ghent.

Would you like to visit the Castle of the Counts with a touch of humour? Then opt for the audio visit, voiced by Flemish comedian Wouter Deprez, and explore the castle and its surroundings with a smile on your face! He will take you on a journey through the castle's history, packed with funny anecdotes and exciting battles between knights in the background. Maybe you will even hear a story which is still unknown to many Ghentians!
The comedy tour is also available for the hearing impaired. A visio guide in Flemish or International Sign will take you on a tour of the castle. A tablet with 18 videos is included in the entrance price and can be requested in the shop of the Castle of the Counts.

Online ticketing Castle of the Counts

Prefer not to wait in line at the ticket booth? Want to be sure you can discover our castle when you want to? Then book your tickets online in advance and enjoy your visit to the fullest.
Book your tickets here!

Count Philip and his castle: dominating the city

Count Philip of Alsace wanted everyone to know that he was the boss. A Latin inscription above the entrance states that Count Philip (1168-1191) built the castle in 1180. The sense of wealth and power that his castle gave him is brought to life when you stand between the battlements at the top of the keep and gaze out over the vibrant city of Ghent.

By that point, the Castle of the Counts was a symbol of abuse of power, feudal repression, horrific torture methods and a cruel inquisition as far as the people of Ghent were concerned. Restoration gave the Castle of the Counts a new meaning and world fame as Ghent’s most important tourist sight, partly due to the World Expo 1913, which took place in Ghent.

On the occasion of the Van Eyck year (2020-2021), the City of Ghent commissioned a new mural. Spanish artist Taquen created his own version of ‘Portrait of a Man in a Red Turban’, which is thought to be a self-portrait by Jan Van Eyck. Want to admire it with your own eyes? The work is only visible from one of the towers of the Castle of the Counts. So be sure to climb the stairs of this medieval fortress and look for the mural!

Visit the Castle of the Counts in Ghent

Do you want to dig deep into the history of Ghent? This is where you need to be. Ghent, full of charming history and modern vibrancy.

Holders of a CityCard Gent do not need to reserve a time slot and will always be allowed to enter. All you have to do is show your CityCard at the desk.

With your ticket for the Castle of the Counts you will receive a free video guide Alison if you visit St Peter’s Abbey within three days. 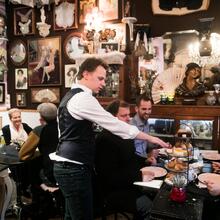 Stylish hotel in the heart of Ghent

Vegetarian lunch bar across the Castle of the Counts 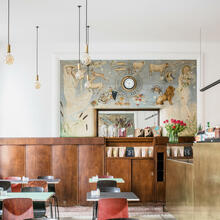