Skip to main content
Ghent is an all-in city trip, with historic charm and modern-day vitality. Are you thrilled by mysticism? You’re bound to love these ruins. This site is steeped in history. In the 7th century, Amand of Ghent founded St Bavo’s Abbey here, in an attempt to convert the inhabitants of Ganda to Christianity.
Add to “My Trip”
1 event planned at this location
All opening hours

The abbey was at the peak of its glory in the 11th century. In competition with St Peter’s Abbey nearby, it grew into a complex that included an abbey church, of which the ‘oldest wall in Ghent’ is still standing.

In 1540, in revenge for the Ghent uprising, Emperor Charles V ordered the demolition of the abbey. The surrounding village was not spared either. This brutal verdict (the ‘Concessio Carolina’) included an order that a Spanish fortress be built on the site of the abbey, sealing the city’s defeat.

Today the shape of the original Romanesque church is marked out with green shrubs. Five-metre-high columns of hornbeam evoke the image of the disappeared church. Where the altar once stood is now a concrete stage where artists perform, giving a sense of the site’s former grandeur. To protect this magnificent site as much as possible, it is only open to visitors for a few hours a week.

You can schedule your group visit online through the link below. The staff at BOEKjeBEZOEK will get back to you as soon as possible with all the necessary the details of your reservation.
Book your group visit online
The information continues beneath the illustrations.
6 photos
Green
Monument
Route planner
This destination is located in the low emission zone
More information about the low emission zone
Public transport

For a guided visit or tour contact one of these three guides’ associations:

Swim in an art-deco interior 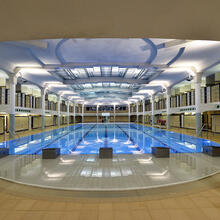 An anything but traditional star restaurant 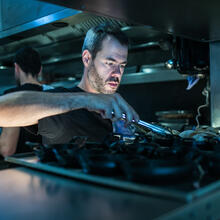 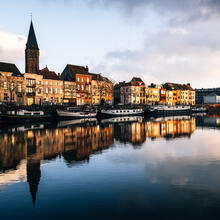